What’s the worst sound in the world?

No matter who you are, there’s always that one sound that makes your toes curl and your skin crawl. Whether it’s terracotta plant pots, nails on a chalkboard or children crying, there are a whole host of sounds out there that can only be described in one way: unbearable.

To get to the bottom of which sound really is the worst, we ran a short poll on social media to gauge people’s reactions to a shortlist of some of worst sounds to ever pass through a human ear. The shortlist was made up of company suggestions with the option for respondents to add their own suggestions if they found that our list of audio atrocities wasn’t abominable enough.

So, here are the results: 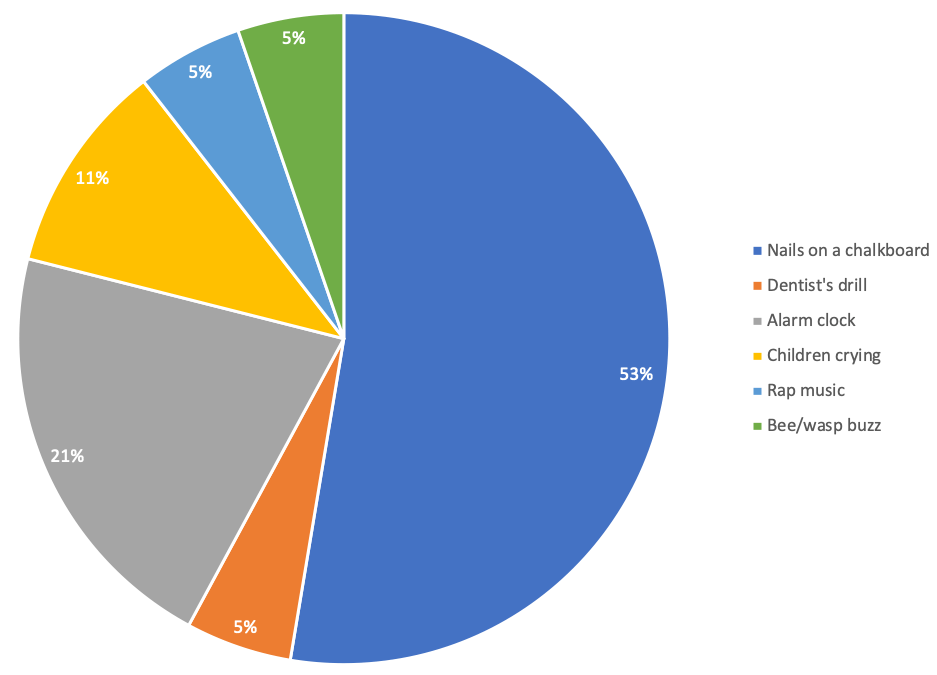 As you can see, there’s a clear winner. Nails on a chalkboard was voted the worst sound in the world by just over half of all those that responded. Coming second with just over a fifth of the vote was an alarm clock, with the sound of children crying coming a distant third on 11 per cent. But what is it about these sounds that make people cringe, shudder or suck their bottom lip when they hear them? Interestingly enough, one explanation may lie with our third-placed entry.

Why do people react badly to certain sounds?

According to LiveScience.com, researchers found that ear-splitting sounds like nails on a chalkboard and alarm clocks, have a very similar frequency to that of a crying child or a human scream, demonstrating that a human’s survival instinct plays a huge part in the negative response to certain sounds. The survival instinct or the innate feeling to save someone’s life or protect them triggers a primal human response, which may account for the physical reaction we have to sounds of this nature.  The shape of our ear canals is also partly to blame, as it’s speculated that it may have evolved to amplify certain sounds to guarantee the ‘survivalist’ reaction needed to react to a scream or a crying child.

But it’s not all as a result of thousands of years of evolution. Our own personal biases could also be part of the problem. For example, a dislike of the sound of an alarm clock is probably less to do with some primal human instinct to survive, and more to do with the fact that an alarm clock signals the time you have to get out of a warm and cozy bed and go to work or school.

The feeling we get when we hear (or even think about) nails on a chalkboard has recently been given the name grima, which comes from a group of Spanish psychologists. According to University of Salford acoustic engineer, Trevor Cox, the frequency range of grima-inducing sounds is between 2000 and 5000 Hertz, which because of the way our ears work, triggers a strong physical response, like that associated with grima. Cox goes on to explain that it’s not just the frequency of the noise that affects how we respond to certain sounds, but also their ‘texture’:

“When you scrape your fingernails down a blackboard, you have this roughness caused by fingernails catching on the blackboard. It’s a bit like how a violin bow works.”

Grima is still largely a mystery, as researchers continue to try and get to the bottom of the exact science behind what causes such extreme physical reactions to particular sounds.

Does your company need help with monitoring area/personal noise?

Interested in learning more about a Noise Protection Program?